Depression is one of the most prominent psychiatric conditions today, affecting approximately one in three adults in the United States (Ettman et al., 2021). During the pandemic, mental health conditions have become so common that this statistic may not seem surprising. But something major is missing from the statistic: children.

Major depressive disorder (MDD) is not exclusive to adolescence and adulthood: it can occur in early childhood, too. On November 10, 2021, Dr. Michael S. Gaffrey joined the Center for Child and Family Policy for his Early Childhood Initiative lecture. This initiative aims to convene scholars whose work focuses on optimizing outcomes for all children. Gaffrey is currently the primary investigator of the Duke Early Experience and the Developing Brain Lab (DEED), where he employs behavioral and neuroimaging methods to study neurobiological underpinnings of risk and resilience in early childhood. Gaffrey strives to integrate research, policy, and practice in the early childhood mental health sphere and believes that this style of collaboration will help maximize the potential of all children.

Gaffrey’s talk, “Early Childhood Depression: What We Know and Where We Are Going,” highlights how MDD manifests itself in early childhood, as well as interventions on both the brain and behavior level. Perhaps most importantly, experience of early childhood depression is associated with depression later in life and, consequently, with greater burden of illness. Simply put, this is because early life experiences become embedded in our brain architecture. Anything that disrupts normative processes has downstream effects. Thus, knowledge of MDD’s appearance in children allows us to better identify and, subsequently intervene upon, early childhood depression, increasing the chances of positive outcomes later in life.

What are the signs?

What can we target?

Gaffrey found that experience of positive and negative affect is associated with different developmental trajectories. Specifically, functional connectivity, or how different brain regions communicate with each other, affects the frequency with which a child feels positive or negative.  Gaffrey used functional magnetic resonance imaging (fMRI) to determine the relationships between levels of regional brain activity and experiences of preschool depression. fMRIs track blood oxygenation level-dependent (BOLD) signals, which reflect changes in blood flow throughout the brain and thus indicate regions of activity and inactivity.

The amygdala, often referred to colloquially as the brain’s emotion center, is known to activate in response to facial expressions. In Gaffrey’s study, preschool-aged children were shown happy, neutral, sad, and fearful facial expressions, and researchers tracked amygdala reactivity as a measure of emotion regulation. Across all emotions, children with depression showed increased amygdala activity in the right hemisphere of their brains. This means that children with depression felt stronger emotion toward these faces than their healthy counterparts.

Gaffrey then examined the connectivity between the amygdala and the rest of the brain and emotion regulation. In doing so, he found that the more the amygdala communicated with the medial prefrontal cortex (mPFC), a subregion of the frontal lobe, the better emotion regulation was. We can think of the mPFC as our regulation center, which becomes stronger as we learn to control our feelings. Putting those findings together, Gaffrey ran a mediation model where he determined that amygdala-mPFC connectivity mediates the relationship between emotion regulation and experience of negative affect. In other words, the amount that the emotion center communicates with the regulation center affects experiences of negativity.

How do we intervene?

While interventions are constantly evolving, they generally focus on developing skills to regulate emotions. One prominent example is Parent-Child Interaction Therapy, which aims to diminish negative experiences by equipping the child with the skills needed to tackle those emotions.

As mentioned above, early experiences become embedded in our brain architecture. But this also means that our brains are still malleable in early years, so there is ample opportunity for intervention. Using Gaffrey’s findings, we can work to decrease risk for early childhood depression by employing interventions that target communication between the emotion center (amygdala) and regulation center (mPFC) of the brain.

Ainsley Buck is a senior undergraduate student studying Neuroscience (B.S.) and Child Policy Research. She intends to pursue a PhD in Child Clinical Psychology and is excited to integrate research, practice, and policy in her future work. 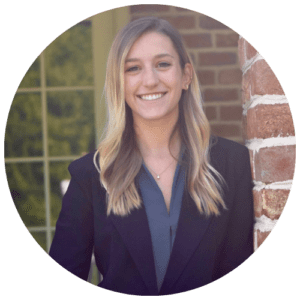