Wilkie Wilson is research professor of prevention science at the Social Science Research Institute, Duke University. Wilson is a neuropharmacologist who studies the ways in which alcohol and other drugs interact with the central nervous system, with a particular interest in how the brain acquires and stores information.

An author of numerous scientific publications, book chapters and books, he has trained more than twenty young scientists and physicians. He is a senior editor of Jasper’s Basic Mechanisms of the Epilepsies, and an author of three books for the general public: Buzzed: The Straight Facts About The Most Used and Abused Drugs From Alcohol to Ecstasy; Pumped: Straight facts for athletes about drugs, supplements and training; and Just Say Know: Talking with kids about drugs and alcohol. In addition to continuing his laboratory research, he now lectures, consults, and makes media appearances to advocate for effective education about the responsible use of alcohol and other drugs.

His work at the Center includes the project A Neuroscience-based Health Curriculum to Promote Academic Success. 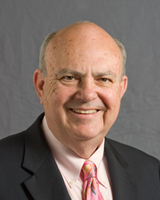