DURHAM, N.C. — Harsher immigration law enforcement by U.S. Immigration and Customs Enforcement leads to decreased use of prenatal care for immigrant mothers and declines in birth weight, according to new Duke University research.

In the study, published in PLoS ONE, researchers examine the effects of the federal 287(g) immigration program after it was introduced in North Carolina in 2006. Under 287(g) programs, which are still in effect, local law officers are deputized to act as Immigration and Customs Enforcement (ICE) agents, with authority to question individuals about immigration status, detain them, and if necessary, begin deportation proceedings.

According to the study findings, the 2006 policy change reduced birth weight by an average of 58.54 grams. It also resulted in more births of babies who were small for their gestational age. Those births rose by 2.29 percentage points.

In addition, immigrant parents used less prenatal care, meaning they either did not see a health care provider in the first trimester or missed at least half of their recommended prenatal visits. 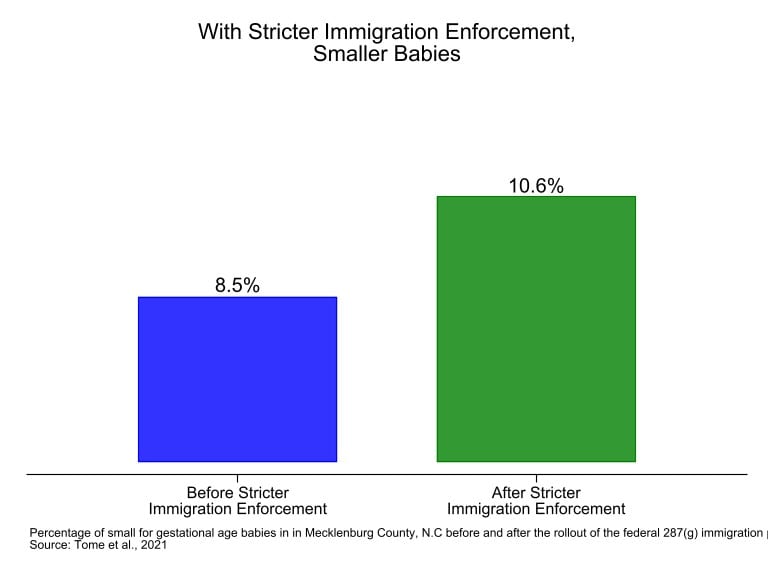 “There are economic costs to adverse birth outcomes, both for children involved and to society,” said Marcos Rangel, co-author of the study and professor of public policy at Duke University’s Center for Child and Family Policy. “The recent uptick in ICE activities under the Trump administration may have long-lasting, harmful effects on U.S.-born citizens.”

The study is believed to be the first to examine how the 287(g) program affects infant health. Using administrative data from 2004 to 2006, researchers examined birth and maternal health outcomes for immigrant mothers residing in Mecklenburg County before and after the 287(g) program was implemented.  They then compared the Mecklenburg data with similar statistics in counties that did not adopt the programs. Mecklenburg is home to the state’s largest city, Charlotte.

The researchers did not identify why immigrant women used less prenatal care. However, the authors suggest that fear may be one motivation.

“If going to the doctor means you might run into ICE, maybe you don’t go,” said Christina Gibson-Davis, professor of public policy and sociology. “It wasn’t the intention of the policy, but pregnant women not getting adequate prenatal care is worrying.”

“The adverse effects of the 287(g) program essentially counteracted the beneficial effects of participating in SNAP or WIC,” said Romina Tome, an economics researcher at American Institutes for Research and recent Ph.D. graduate of Duke University’s Sanford School of Public Policy. “Exposure to policies during pregnancy can either be harmful or hurtful. These ICE policies appear to be harmful.”

This research was supported by the M.R. & C.G.D. Robert Wood Johnson Foundation.