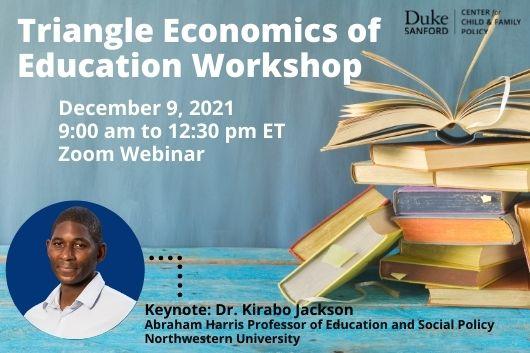 The Triangle Economics of Education Workshop (TEEW) will bring together scholars to present and discuss empirical research on the economics of education.

Dr. Kirabo Jackson, Abraham Harris Professor of Education and Social Policy at Northwestern University, will give the keynote address, What is a Good School, and Can Parents Tell? Evidence on the Multidimensionality of School Output. Jackson is a labor economist who studies education and social policy issues. He has analyzed several important aspects of education policy such as the importance of public school funding on student outcomes through adulthood, the effects of college-preparatory programs on students’ college and labor market outcomes, the effects of educational tracking on students’ academic achievement, and the effects of single-sex education on students’ academic performance.

Jackson’s scholarly articles have appeared in leading economics journals such as the Quarterly Journal of Economics, American Economic Journal, Journal of Labor Economics, The Review of Economics and Statistics, and The Journal of Human Resources. His research has been featured in a number of mainstream media outlets, including the New York Times, Wall Street Journal, Washington Post, and others. Jackson’s work has been supported by the National Science Foundation, Spencer Foundation, Carnegie Corporation of New York, Smith Richardson Foundation, and other organizations.

This workshop will be held via Zoom. Links for the program and abstracts are available in the Resources box on the left.