School Desegregation: Past, Present and Future 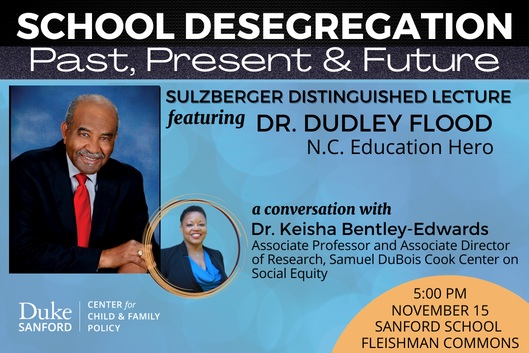 During this Sulzberger Distinguished Lecture, Dr. Dudley Flood, former educator and champion of school integration, will share his personal insights on the long road to school desegregation in North Carolina, today’s challenges and opportunities, and the future of N.C. public schools as resegregation increases.

Dr. Keisha Bentley-Edwards, associate professor and associate director of research at the Samuel DuBois Cook Center on Social Equity, will facilitate the discussion.

In 1969, many schools in the South were still segregated, although more than 15 years had passed since the Brown v. Board of Education decision. Some school districts actively blocked desegregation while the N.C. legislature authorized tuition grants to white private schools, which became known as “segregation academies.” Dr. Flood joined the N.C. Department of Public Instruction in 1970, tasked with helping communities desegregate schools by meeting with elected officials, community activists, and parents. His work in Hyde County, where Black parents had been boycotting the schools for nearly a year in protest of a plan that would have closed two historically Black schools, is illustrative of the challenges he faced and his successful collaborative strategy for change.

He served for 12 years on the Board of Governors of the University of North Carolina. He currently serves on the N.C. Minority Cancer Awareness Action Team, the Public School Forum of North Carolina Board, the Wake Education Partnership Leadership Council, the UNC Press Advancement Council, and on several other boards and committees. The Dudley Flood Center for Educational Equity & Opportunity is named in his honor.

Dr. Flood earned a bachelor’s degree from North Carolina Central University, a master’s degree in educational administration from East Carolina University and a doctorate degree in the same field from Duke University.

This lecture is made possible through an endowment from the Arthur Sulzberger Family. Please join us for a reception immediately following the talk.