Race, Income, and Parental Spending on Children’s Care and Education 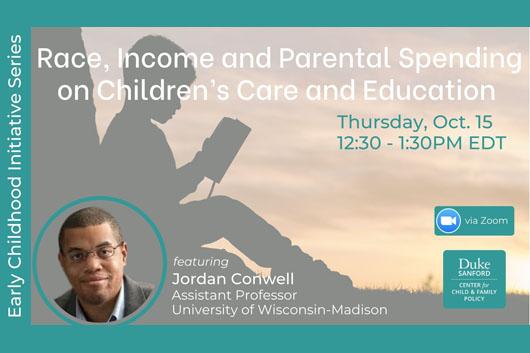 Compared to the growing literature on income disparities in parental spending on children’s education and care, little is known about racial differences in these investments, including whether there is racial variation in such spending, net of income—the factor presumed to structure access to financially intensive child development strategies. This study uses data from the Consumer Expenditure Survey to investigate whether and to what extent there are differences in spending on children between White, Black, Hispanic, and Asian households who report comparable incomes. Jordan Conwell assessed the extent to which any racial variation on these spending outcomes is accounted for by racial differences, net of income, in family and child characteristics, household education, and wealth.

Conwell is an assistant professor in the departments of Sociology and Educational Policy Studies at the University of Wisconsin-Madison. His research focuses on trends and consequences of racial, social class, and gender inequality in education, with a particular interest in the multigenerational roles of families and finances in these educational processes, as inputs for children and as outputs for adults. His recent studies have appeared in journals, including Journal of Marriage and Family, Sociology of Education, and Urban Education.

He completed a Ph.D. in sociology at Northwestern University in 2017. During the 2020-2021 academic year, he will be a National Academy of Education/ Spencer Foundation Postdoctoral Fellow.