Integration as Public Education Policy: Reflections on the Contours of Opportunity 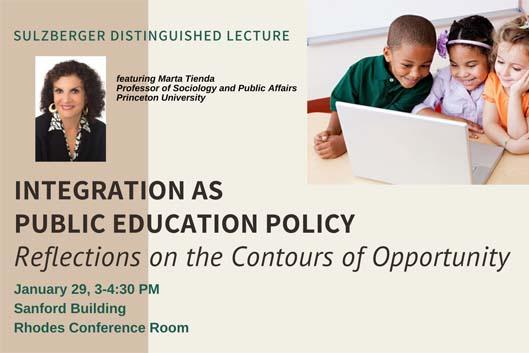 Marta Tienda, Maurice P. During ’22 Professor of Demographic Studies and Professor of Sociology and Public Affairs at Princeton University

Integration is a ubiquitous concept in the immigration literature, but segregation—its opposite—dominates academic discourse about public education. Building on Justice O’Connor’s opinion (Grutter v. Bollinger, 2013) that “[O]ur nation’s public institutions should be pursuing the larger national project of integration,” Marta Tienda argued that restoring the nation’s commitment to public education is indispensable to fuel economic competitiveness and harness demographic dividends from population diversification.

Tienda is Maurice P. During ’22 Professor of Demographic Studies and Professor of Sociology and Public Affairs at Princeton University and former director of the Office of Population Research.

She has authored or co-authored over 200 scientific papers and chapters about U.S. racial and ethnic inequality, international migration, variations in family structure and reproductive behavior, and access to higher education. Her current research focuses on intermarriage, educational opportunity, and the implications of adolescent romantic relationships for emotional and physical wellbeing.

Tienda is past president of the Population Association of America, a former Guggenheim fellow, and is a member of the American Academy of Arts and Sciences, the American Academy of Political and Social Sciences, and the National Academy of Education. Currently, Tienda serves as an independent trustee of the Teachers Insurance Annuity Association (TIAA), the Alfred P. Sloan Foundation, the Jacobs Foundation of Switzerland, and the Robin Hood Foundation. Previously, she served on the boards of Brown University, the Federal Reserve Bank of New York, the W.T. Grant Foundation, the Carnegie Corporation of New York, the Kaiser Family Foundation, and the Russell Sage Foundation. Tienda received a B.A. from Michigan State University and a Ph.D. in sociology from the University of Texas at Austin.